A peek into history A tribute to TWA, a dead airline, features flight attendant uniforms, planes and a voodoo doll 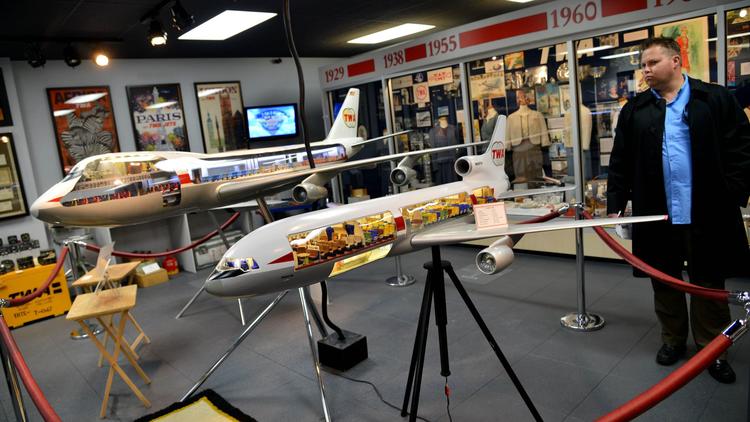 When Art Lujin tells people what he did for the last 25 years and eight months of his professional life, he braces for the question. It’s nearly automatic.

“Oh, yeah,” they say, blanking for a moment. “Whatever happened to them?”

“Them” is TWA. The answer is here, on a few thousand acres in southern Kansas City, where in 1930, two passenger and mail carriers merged to form the first airline promising travel across the continental United States. Its founders named it Transcontinental and Western Air. It later would be better known as Trans World Airlines.

The history of TWA is also the history of American business itself in the 20th century — of expansion and innovation after World War II, of battles for civil rights and against sexism, of business mergers and corporate raiders.

TWA’s birthplace is also its graveyard. This is where the world’s last employee-owned airline came to die in 2001 when TWA merged with American Airlines and its name was retired.

“TWA is one way or another going to disappear as a corporate entity,” said then-American Airlines Chief Executive Donald Carty just after the merger.

He was only half-right. The five-room TWA Museum is a living monument to an airline that once ferried kings and presidents and even a pope or two, now hemmed into the small space at what was Kansas City’s first airport.

It’s still a working airfield. In the dwindling afternoon light of western Missouri, the Chicago White Sox charter plane refueled nearby. Fluorescent bulbs buzzed above an employee lounge and the Flight Plan room, which a reporter was brusquely informed by security was not public.

The museum’s cost of admission is $7.

Lujin stopped at a case showing flight attendant uniforms from the 1920s, through the staid 1940s and the dressy pillbox days of the 1960s. The airline once brought in fashion houses to design stewardess uniforms.

“The Ralph Lauren was definitely the favorite,” Lujin said.

Lujin was a TWA air traffic control manager. He jokes that such a job title meant he was yelled at both by over-stressed air traffic controllers managing takeoffs and landings and the bean counters who demanded faster aircraft turnarounds. He lost his job when TWA merged with American.

Is it sad to work here, in the graveyard of his career?

“Yes and no,” Lujin said. “It was a great airline to work at, and sometimes people want to know what happened to TWA. Here, it’s not dead, it’s a living thing. At least to us.”

He turned and pointed to a spindly wooden-winged plane.

“The Fokkers were Dutch planes that carried the airline in the early days,” Lujin said, pointing to a wooden-winged tri-motor aircraft.

The Fokker also almost ended TWA just after its founding, when Flight 599 crashed in a Kansas field in 1931, killing famed Notre Dame football Coach Knute Rockne and seven others. Rockne’s funeral drew tens of thousands of mourners, and calls for improvements to airline safety followed.

But the airline survived, in part because of its “fair weather” service that could take passengers from coast to coast — not by focusing on the big coastal cities, but by assembling a Midwestern and Southwestern network of hubs, working from the inside of the country out.

The strategy succeeded. By 1946, the airline was making its first international flights, first to Europe, then Cairo, Bombay and Manila. In 1969, it completed a trans-Pacific route that made it truly possible to take TWA around the world. Along the way, the airline was also the first major carrier to hire a black stewardess and the first to show in-flight movies.

At the height of its arc, under the stewardship of Howard Hughes, TWA was the gentleman’s airline. The Royal Ambassador Service afforded first-class guests table cloths, caviar and Chateaubriand. Handsets on board could call direct to phone lines on the ground.

Presidents Lyndon B. Johnson and Richard Nixon flew TWA. So did James Bond in “Diamonds Are Forever.”

But the TWA Museum is far from a “Mad Men”-style hagiography. It also tells the unvarnished truth: While the country below was changing rapidly, all those airborne gentlemen were a difficult crowd to convince when it came to the advancement of women’s rights.

“There is no doubt that companies discriminate against flight attendants on the matter of weight,” wrote Martha L. O’Rourke, president of the Airline Stewards and Stewardesses Assn., to union membership on Sept. 26, 1973. “However, public sentiment may not be with us.”

“Dear Kathy,” began a 1982 company letter framed in the museum congratulating a stewardess on her weight loss. “You will now be placed on an informal appearance program with a goal weight of 126 pounds.

“This program involves your being weighed on a monthly basis.”

Weigh-ins eventually went away, but the airline had other problems.

Throughout its history, TWA had a propensity for creating its own adversity, as if perpetually and deliberately flying into a stiff headwind of its own making. Debt-laden from Hughes’ notorious secrecy and financial mismanagement, the airline’s new owners had diversified its investments, moving away from the airline industry and toward purchases of more promising companies.

But by the mid-1980s, TWA was a money-losing component of a much larger portfolio that included Hilton Hotels and Century 21. In 1984, the conglomerate cut TWA loose.

In stepped Carl Icahn, an activist investor with a lupine reputation for hunting and devouring struggling public companies.

Early on in his tenure as the airline’s largest shareholder, Icahn said his strategy was based on improving a company’s margin by, ideally, growing it. But first he made cuts. Then he sold off TWA’s profitable London routes. Then he took the company private, which netted him $470 million in profit and saddled the company with more than $500 million in debt.

According to Elaine X. Grant’s comprehensive autopsy of the airline’s demise, “TWA – Death of a Legend,” TWA’s last stanza began with its 1992 declaration of bankruptcy, followed by another bankruptcy in 1995.

Then, mirroring the Knute Rockne crash, a tragedy once again put the airline in danger. On July 17, 1996, all 230 people aboard died when faulty wiring led to a fire and the disintegration of TWA Flight 800 over the Atlantic Ocean near East Moriches, N.Y., providing the ending bookend of TWA’s 71-year life.

The airline limped on for another five years, but onerous union contracts and a lack of cash flow proved too much.

Its location didn’t help: TWA’s original strength – its inside-out strategy of focusing on the middle of the country – helped do it in. As a Midwestern location, St. Louis simply wasn’t viable anymore when flights originated in major population centers like Chicago and Dallas.

Stubborn like the company it chronicles, the museum is in an inconvenient and out-of-the-way location, its existence only marked by a small brown sign on Interstate 70.

Visitors on a late Friday afternoon were nowhere to be found.

“We get a lot of people who already know we’re here,” Lujin said, before extolling the joys young people could have at the museum’s flight simulator. “We tell them to come back with their kids.”

In one of the final glass cases on the TWA Museum tour, Icahn’s likeness is etched onto a small bag atop a tiny stuffed shirt, pants and tie. It is a voodoo doll, with visible holes opened by dozens of pins.

The pins have been pulled out, as though readying the doll to be stuck again.

“There he is,” Lujin said, sheepishly pointing to Icahn’s effigy. “You know, there’s still a lot of people angry.”

He would not disclose whether he is one of them.

Chilly gusts from the Rockies barrel east over flat Kansas plains to sweep across the lonely airfield outside the museum’s windows. Waiting there, still and lonesome, is a crimson Boeing MD-80, a relic from the old days.

On its tail is a design appropriate for a company that always seemed to choose the elegant solution, even if it was expensive, overly optimistic, nonsensical, self-destructive and deliberately difficult. It is a maroon rhombus, with boxy white letters leaning just slightly forward, as if into a stiff wind of its own making, spelling out TWA.

Article by Nigel Duara for L.A. Times / Photography by Dan Ray / For The Times